If you’re lucky enough, you’ve seen Virginia snakeroot in bloom. If you’re like me, you almost passed it by. You may have bent down to part the goldenrod and geranium to find the little nondescript plant there on the ground, its curvy tubular flower hidden beneath its leaves, purple and blotchy and arching up from the base of the stem. And then, if you’re like me, you got up from the ground, moved a few steps further on, and continued to fill your bag with garlic mustard.

The reason I bring up Virginia snakeroot in the middle of garlic mustard pulling season is that lately I’ve been thinking about extinction. Virginia snakeroot is listed as threatened in Michigan, where a few stray populations hang on in floodplains and rich forests in the southern tier of counties. Though it’s never abundant within its range, it’s a little more common further south and east of us and has been assigned a rating of G4, which means that from a global conservation standpoint it’s “apparently secure.” To be completely objective, despite its protected status in Michigan, Virginia snakeroot is probably fine. From a global perspective, it’s not going anywhere. There are much more imperiled species that we are worried about, species whose tiny populations and restrictive ranges put them at legitimate risk of being quietly blinked out by any number of means.

The problem though, for Virginia snakeroot and other quasi-imperiled species, is that extinction doesn’t happen all at once. It begins as a series of micro-extinctions, localized extirpations that in themselves aren’t very significant–a spotted turtle driven out of its wetland home by a spreading wave of loosestrife or a purple milkweed that can’t hang under the shade of an encroaching grove of honeysuckle. From a large-scale perspective, these losses are usually negligible. Any of these individual losses doesn’t put a species at much greater risk of extinction, probability-wise. But extinction is sneaky, and these things add up. In fact, aside from outright habitat destruction, invasive species are the leading cause of species extinction worldwide.

Recently, I was re-reading an article I first encountered several years ago called “Planet of Weeds” by the science writer David Quammen. Quammen looks at the long view, thousands of years down the road, to a time when ecologists with pessimistic streaks predict that only the weediest of species will be left in a dramatically altered state of nature. Quammen, with a focus mainly on the animal kingdom, sees our future burgeoning with things like pigeons, coyotes, rats, cockroaches, crows, and feral dogs. 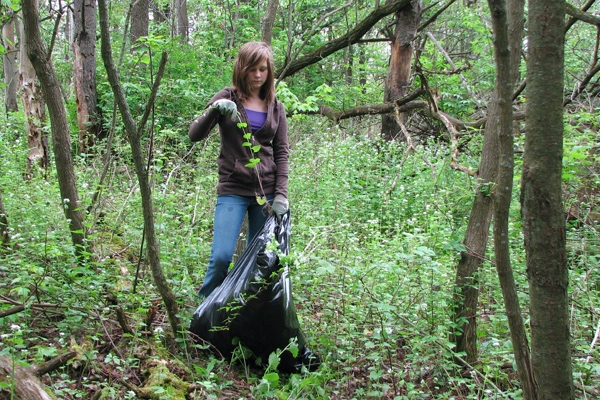 You could add garlic mustard to that list, along with phragmites and buckthorn and all the other invasive species we pull, spray, burn, and hack out of our natural areas. Virginia snakeroot, though, is not on that list, nor is the pipevine swallowtail, a brilliant blue-black butterfly that uses Virginia snakeroot as a host plant. The common thread in the list of species Quammen gives is that, “they are scrappers, generalists, opportunists. They tend to thrive in human-dominated terrain because in crucial ways they resemble Homo sapiens: aggressive, versatile, prolific, and ready to travel.”

It’s not exactly a happy feeling, knowing what our future is likely to hold. It’s no comfort, either, that we humans are overwhelmingly the cause of the problem. It kind of makes you want to give up, to throw in the towel, to stay home from the next volunteer workday. At least that’s how I felt when I first read the article.

But this time around, I noticed something different about this description of humans and our invasive brethren, especially about the adjectives used to describe our tendencies. The same words used to describe our weediness also describe the tenacity by which many of us combat the decline of biodiversity in our natural areas: scrappy, opportunistic, aggressive. And that’s reason to be hopeful. 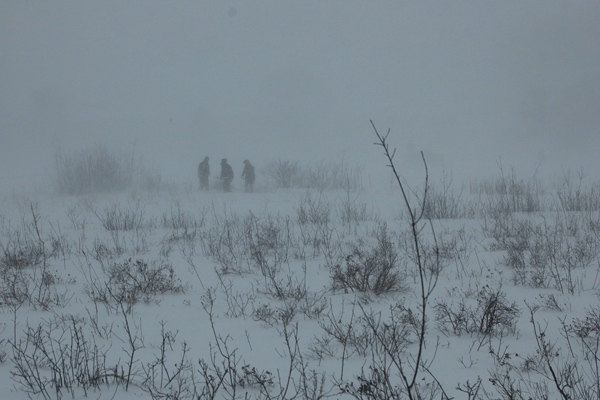 Every year about this time, many of us hit the woods of nearby preserves and backyards, braving rainy mornings, poison ivy, and the onset of mosquito season. We pull garlic mustard fervently and fastidiously, by ourselves or alongside others who share our strange passion. We lug out garbage bags full of plants and return home, tired, the smell of stale garlic lingering on our clothes and skin for what seems like days. Our efforts may not have saved a vestige population of Virginia snakeroot, and we may not win every battle, but we’ll sure put up a fight. We’re scrappers, after all.