in Features
by guest
2 Comments 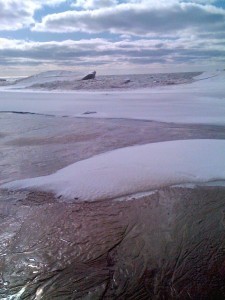 (After you’ve read my list, please add your own items as comments.)

Freshly fallen snow has a fragrance brighter than summer.

New snowflakes cut into the trail’s icy hardpack under your boots, providing a pretty good grip.

Till the big lake freezes, it’s voice is omnipresent, no matter how tucked into the trees you are.

Unless the dunes are buried deeply with snow, sand moves, sometimes hundreds of yards in a single storm, which almost always blow from the west. Early winter rearranges the dunes and moves them inland.

Bright white, often solitary gulls fly, even in heavy winds. In fact, they seem to play.

Beech tree saplings hold onto their leaves all winter. Some years they’re the color of sugar sand, others new copper pennies.

No matter the bitterness of the wind or the coldness of the ambient temperature, wooded trails around the bases of the dunes are always warm enough. But you will have to give up panoramas.

During thaws, the puddles in footprints teem with minuscule black bugs.

When the wind blows from the east, the sound of the interstate penetrates farther than during the leafy seasons, even into swales.

Once the lake freezes, the cold and the quiet become monumental.

Leaves and twigs scrape and chickadees twitter, all winter long.

Alison Swan’s poems and prose have appeared in many publications, including her poetry chapbooks Before the Snow Moon and Dog Heart, the recent anthologies Here: Women Writing on the Upper Peninsula and Poetry in Michigan/Michigan in Poetry, the journals TriQuarterly and Michigan Quarterly Review, and The Michigan Poet broadside series and anthology. Her book Fresh Water: Women Writing on the Great Lakes is a Michigan Notable Book. She’s been awarded a Mesa Refuge Fellowship and the Michigan Environmental Council’s Petoskey Prize for Grassroots Environmental Leadership. She teaches in the Environmental and Sustainability Studies Program at Western Michigan University and lives in Ann Arbor. She has been active in efforts to protect and preserve the Saugatuck Dunes on the southeastern shore of Lake Michigan since 2001.