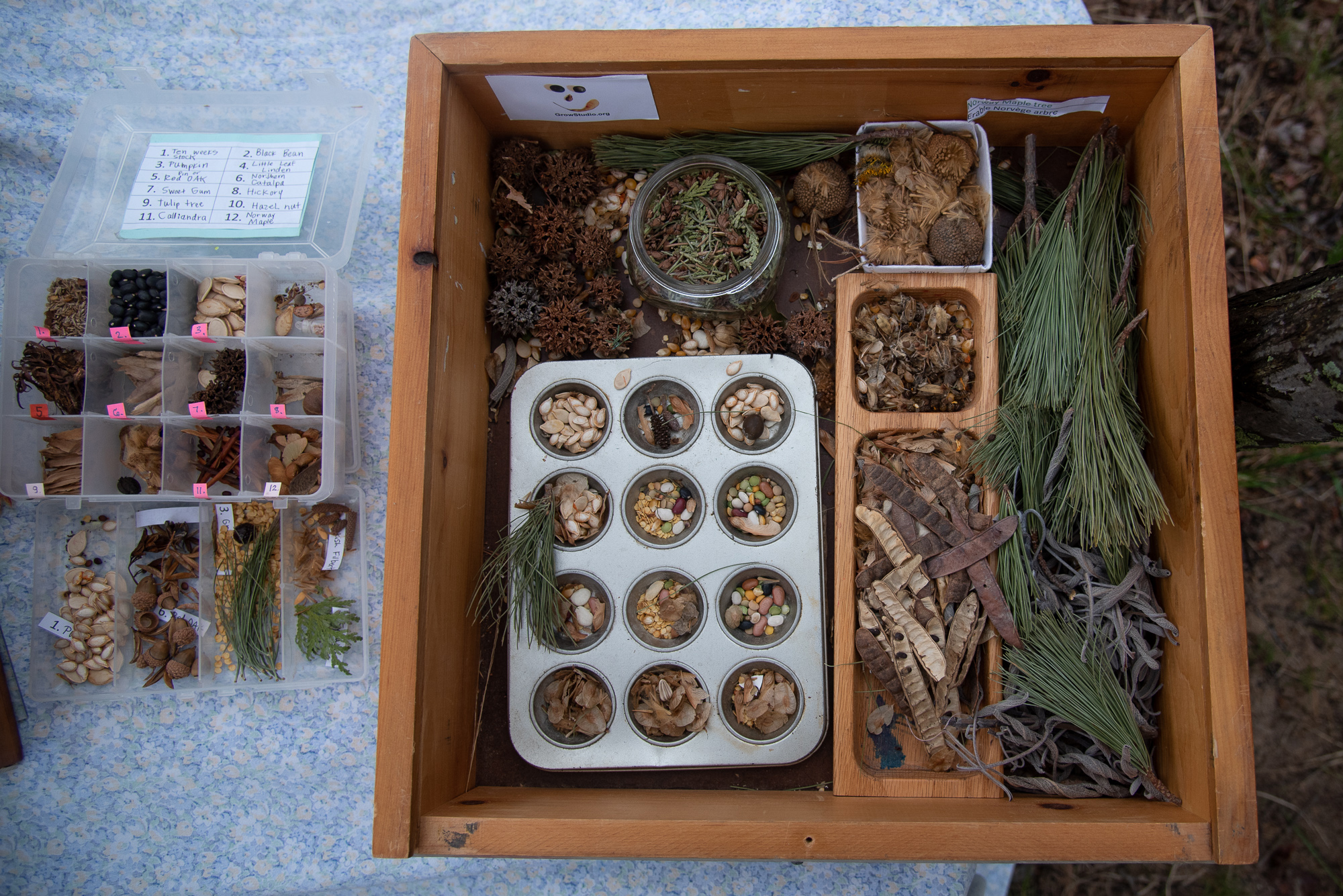 Shilin Hora brings the outdoors in

Shilin Hora brings the outdoors in

Shilin Hora grew up in a home surrounded by a peach farm, a pumpkin patch and a vineyard. The granddaughter of a farmer, she spent much of her childhood interacting with nature.

“When you’re working with produce, picking at berries, you’re always looking at the minute—looking at tiny things,” Hora said.

Her curiosity about and admiration of the tiny worlds found on forest floors, in fields and in the cracks of sidewalks began at a young age. She collected small natural objects to create makeshift terrariums.

“I remember being seven years old and taking glass canning jars and curating tiny environments inside of them,” Hora said.

Hora eventually took her unique inclination to Grand Valley State University, where she studied printmaking. As a student, she spent much of her time in the ravines by the university observing and drawing the specimens she found there.

“I would just put my face down to the ground and draw,” Hora said. “That’s when I discovered the teacher in the woods.”

She would lay a blanket on the floor of the ravines and collect objects to study. She found herself drawn to the textures, colors and shapes of the objects in her observation pile. Hora started to experiment with juxtaposing certain objects: a milkweed pod with a stone, a rough piece of bark with a soft dandelion flower. She drew inspiration from natural history collections and the framed assemblages of Joseph Cornell.

Eventually, Hora arrived at her signature “botanical boxes”—delicate arrangements of seeds strung together on a grid of thread. Some pieces are dedicated to the species represented: ash tree, coreopsis, coneflower and pumpkin. Others are seed-based portraits of locations.

“One of my goals is to encourage intimacy with nature, because I’ve always had that,” Hora said. “An interesting way to do it is to get people’s faces literally up on the glass and have them be like ‘Oh my gosh, that seed has hairs. Why?’”

Hora asked participants in the 2019 P.J. to Pier Hike to closely observe the nature around them.

Those close observations often evolve into learning opportunities. What starts as a question about a seed with hairs becomes a discussion about seed dispersal mechanics.

Hora is moved to inspire these conversations because she sees a disconnect between the childhood she spent in nature and the one her daughter’s peers experience today.

“I had this treasured childhood where I was connecting to the local landscape, and I found it curious that other people didn’t do that, or didn’t have a way to do that.” Hora said. “It’s important to take off your shoes and connect with the earth.”

Hora’s desire to help others make that connection has manifested in more ways than just her art. In 2007, she started GrowStudio, a public art project where Hora hosts workshops for kids and adults that seek to connect art, science and the natural world. Participants in her workshops collaboratively build seed quilts they later plant in the earth or collect objects they can observe and draw. The workshops inspire conversations about seed identification, recycling and finding nature in an urban environment. She has also led a nature preschool in Chicago through which she sought to connect young children and their families with their local landscape.

Hora’s mission is to “bring the outdoors in.” She hopes her artwork encourages people to think about nature in unlikely spaces. With Preserved!, she looks forward to connecting with an audience who shares similar values.

“(Preserved! is) this opportunity to have a conversation with people who already believe in the importance of nature, but then offer them another way to bring nature and art into their homes and offices,” Hora said.

Catch new work from Hora inspired by Land Conservancy of West Michigan preserves at the Preserved! gallery exhibits in October.

Featured image: “Dedicated to the Sunflower and Morning Glory Seed” by Shilin Hora